On July 7, 1929, at the age of 33, Ruth Fowler died of pneumonia following an auto accident approximately two weeks earlier.  Ruth's sister "Aunt Elvie" (Mrs. Elva J. Ridgeway Trammell) relayed the story to the family and Mary Alice Cator told it to me many years later:

The Fowlers resided at 204 F Street NW in Apartment 2.  He worked in "autos."  Georgetown University has a law center campus here now. 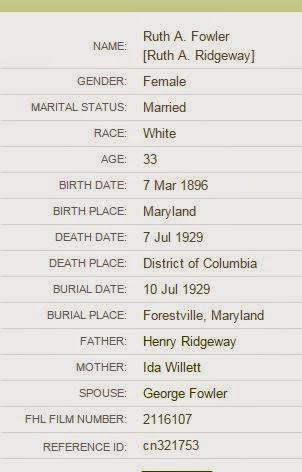 George Fowler and Ruth had been driving around one of the street circles in Washington DC when revenuers, chasing bootleggers, slammed into their car.  Ruth struck her head very hard. She was taken to Providence Hospital but refused to stay there.  Ruth was brought home on a stretcher to their apartment on F Street.

The accident took a lot out of her. One of Ruth's friends cared for her at home for two weeks even though that friend was suffering from a cold.  While recovering, Ruth contracted the cold or the flu. Her system failed to be able to handle the overwhelming accident and illness simultaneously and she worsened.  Ruth was taken back to Old Providence Hospital in Washington DC where she died.

Grandmother Ruth had no children by her then husband, George Fowler, but Grandmother Ruth and Granddaddy Charlie Cator Jr.'s children were still underage.  Bernice (in the flowered dress) was born in 1915, was only 14; Evelyn was 12; and Mary Alice Cator was just 11.  It is said that the three girls spent a short time in a local orphanage before being moved to live with their father, Charlie Cator, in Washington DC.  This meant that Charlie Jr and his 2nd wife Florence were now parenting 6 daughters including Jerri (Florence's daughter), and both Dorothy and Cora Cator, children of Florence and Charlie Jr.  All were living at 910 G Street, SE in DC.

About Prohibition and Washington DC

During Prohibition, people, states and political sides referred to themselves as "wet" or "dry." During this American experiment in trying to be freed from alcohol, the efforts were quickly unraveled.

In the book, Prohibition in Washington, D.C.: How Dry We Weren't it was stated that bootleggers routinely, week after week, brought 22,000 gallons of whiskey, moonshine and the like to DC's 3000 speakeasies.  The bootleggers traveled about town with their clandestine goods, the revenuers raced after and tried to detain and arrest the bootleggers and confiscate their illegal goods.  Prohibition began to fade in 1933.

It is interesting to note that drinking was not illegal. Enforcement was aimed at banning or barring the making, selling and shipping of alcohol for consumption.*