Barbara Keyser was a special person.  Unfortunately I never got to meet her husband (that I recall) but know they led interesting lives.


HER HUSBAND JACK's EARLY YEARS.
I know little about Jack, but I see in his son  his father's love for tinkering and making reuse of many things.  Being a farmer, Jack no doubt found it advantageous to repair machines that had hiccuped.  He also was a builder, of their home and other structures that met their needs.

A member of the family had a Hillman Minx -- a rare car.   Hillmans were manufactured in Britain and imported to the US in a "foreign invasion" of our GM, Ford and Chrysler dominated market. 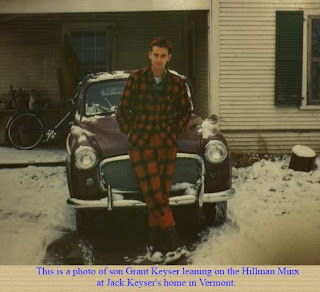 BARBARA'S EARLY YEARS:'
Barbara's father, Christian (or Crist) Bernert, came to America in 1906 from Hungary with his wife Julia Roff Bernert and their children Elizabeth and Peter.  Three years later in 1909 the family returned to Hungary.  While in Panscova, Austria-Hungary, their daughter was born...Barbara (Barbala) Rose Bernert (later Keyser) on July 26, 1909, a Leo astrologically.  When she was almost 4, Barbara emigrated with her family to New York, America, on the Ship Ivernia.  This must have been quite an experience for a young girl.

Barbara's father ultimately worked as a Tool and Die Maker for Ford Motor Company and joined the Teamsters.  He also worked for Hercules Tool and Die in Warren, MI when they made and sold generators to the U. S. Army.  At one point the Teamsters, who were communist leaning, had Christian signed up to go to Russia with the Teamsters group; they were to be paid in Rubles.  Crist decided he did not want to go; five of those who did "disappeared" in Russia.  Christian was friendly with Walter Reuther (President of the UAW from 1946-1970).  Many Teamsters attended the funeral of Barbara's father, Christian. 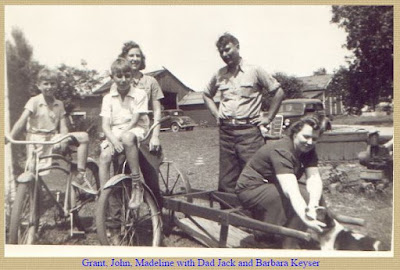 Barbara loved orchids.  A hobby and fascination that has been passed down to her son and daughter-in-law who both have many lovely orchids hanging from the limbs of their trees.

Barbara Keyser died October 22, 2003 following a good day and following enjoying ice cream for dinner.  Her heart simply stopped even though she wore a pacemaker for several years.  She was cremated and buried alongside her husband Jack at Evergreen Cemetery in Ft. Lauderdale, FL.

Barbara died in Melbourne, FL, near the home of her son, daughter-in-law and grandson.  Barbara also received many visits from my dad until he passed away before her.  She missed his visits very much.  Barbara was SO much like my own grandmother Alice Southworth Healey that it was amusing to see the similarities.  If they were not of the same generation, I would have wondered if one was a reincarnation of the other!  Nice.

Barbara is an "AFP" (Almost Famous Person).   Barbara worked for a period of time for a corporate lawyer, who became a good friend of the family. In 1945 she had Roger and stayed home about one year. Grant and Johnny, her stepsons, were living with her and Jack. Their lawyer friend visited with Jack and Barbara regarding land in Vermont which was very inexpensive. Jack loved it and moved the family to Vermont in one week - a sizable feat! Their first Vermont home had a little gas station on the land in Colchester Vermont, Jack built the garage. This was a 4 bedroom house. They were able to have boarders and Barbara used to bake pies for restaurants (and for boarders). Then she got a job with an insurance company in Essex. Her boss was a State Senator. Barbara, having lived in Colchester for a mere 3 years was elected as the Town Clerk, a position she held for 17 years. She was the first woman in Vermont to be a Town Clerk - an Almost Famous Person!

At one point she and Jack bought a farm and traded all the farm machinery to buy a grocery store (Keyser's IGA) in Colchester.

Jack and four others started a volunteer fire department in Colchester and donated a piece of land for the fire station. This fire station is now fully staffed with paid firemen.

After Jack had a heart attack in Vermont, they moved to Fort Lauderdale, Florida.

Notes: After they had been married about 3 years, Jack built a home at 17 Collington Avenue, East Detroit, MI. He actually dug the basement by hand and then eventually sold the home.  And, did you know she was  the ENTIRE complaint department for FTD florists during the war?

A Brownie Recipe of Barbara Keyser's


I loved her so much.  Donna Fuller Cator